The island of Krk is one of the largest Adriatic islands. It is connected with the mainland by the Krk Bridge and is therefore easily accessible to visitors - both in the summer and in the winter months. All roads lead to Krk – besides the road connection, Rijeka airport is also on the island which connects it to faraway European destinations whilst its numerous ports and harbours are a shelter for ferries and other boats. Thanks to the mild Mediterranean climate, the diversity of the island’s flora and fauna, its rich historical and cultural heritage and its numerous natural beauties, the island of Krk is the most famous tourist destination in the north Adriatic. Already in ancient times it was known as the “golden island” and due to its rich cultural heritage it is often called “the nursery of Croatian culture”. Larger places on the island are Omišalj, Njivice, Malinska, Dobrinj, Vrbnik, Krk, Punat and Baška and each of them will reveal hidden magic in which the past and the present, the legends and the realities of the new age live together.

The island of Krk is surrounded by the sea splashing the nearby islands of Cres, Lošinj and Rab as well as a large number of islets which during the summer, are connected by ferry boat lines. The diversity of Krk’s relief attracts hikers and cyclists and its beautiful pebble or stony beaches are a paradise for swimmers and water sport lovers. The thousand year old monuments, romantic paths by the sea, limestone water phenomena in stone, flavours of wine and olive oil in the ancient dishes of the island's cuisine will evoke all your senses and feelings. Discover the hidden treasure of the island of Krk!

If you come to the island of Krk by car, across the Krk Bridge, Baška is the last place awaiting you on that road. But the cream always comes to the top! On the far south-eastern part of the island, unique and hidden amongst the hills, Baška deserves to be described first. When you reach the highest point on the island (Obzova 570 m) and when you start descending towards the Treskavac pass, all at once, in front of your eyes, a breathtaking valley will appear. At the end of it is located Baška and the sea that washes its two kilometre long pebble beach.

The natural beauty of this landscape can neither be ruined by a bad mood or by bad weather. Baška is located between two mountain highlands, in a bay surrounded by the white pebbles of Vela Beach. Here even the smallest children can bathe as the entrance to the sea is gradual and safely reaches the depth. For those who like an active holiday, there are around 90 kilometres of walking trails on the hills above Baška from which extend unforgettable views over the Velebit mountain massif as well as over the islands of Prvić, Grgur, Rab and Cres.

The ancient part of Baška is a picturesque area due to its narrow cobbled streets and unusual chimneys as well as its small harbour protecting boats from the capricious bura (north-eastern) wind. As the most famous tourist centre on the island of Krk, Baška disposes of numerous hotels, private accommodation and camp sites. Besides its rich archaeological finds and cultural and historical monuments, the Baška Tablet should also be mentioned. It is the stone document written in the Glagolitic alphabet, old Croatian symbols, which dates back to 1100. 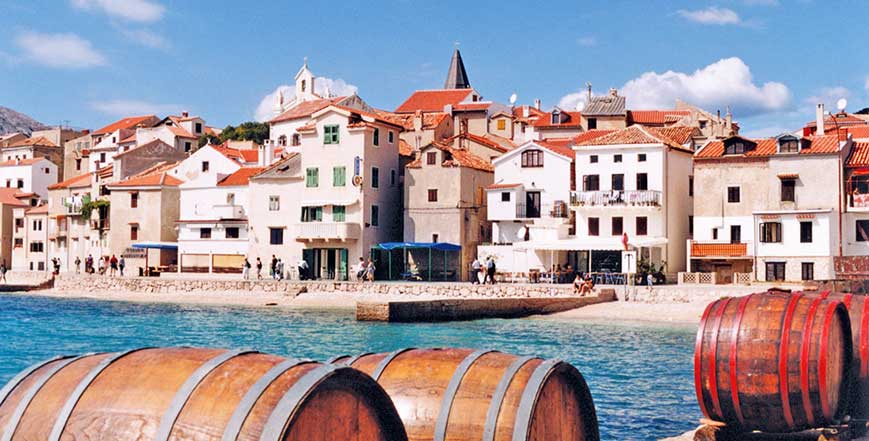 During the months of July and August Baška is visited by everyone – during the summer heat, its beaches offer the joy of swimming in the sea, sailing or rowing whilst its numerous restaurants offer gastronomic pleasures. Nonetheless, the real wealth is experienced during the other seasons - in the peaceful atmosphere of spring’s awakening or the first autumn fishing, its beauty will be uncovered by those interested in Kuntrep the ornithological reservoir, puddles and shepherds’ shelters located in the hills, the Glagolitic path, the tranquillity of the Vela luka bay or a glass of wine with local fishermen.

Baška is a place with a thousand faces, discover them and fall in love with at least one of them!